The year of solemn and inclusive commemoration which marks the centenary of our revolution is drawing to a close.  In every part of our country people have gathered to pay their respects and to unite in honouring the warm and open vision of our greatest generation.  It is very fitting that one of the final events is here in Wexford to remember the great Liam Mellows.

William Joseph Mellows was by any measure both an inspiring leader and a man deeply rooted in the idea of service.  He died at the very young age of 30 having packed into his short life a genuinely extraordinary range of achievements.

Liam Mellows did not conform to any caricature of a revolutionary.  His father and grandfather before him were soldiers.  He was born in a Lancashire military barracks and was educated in a series of military schools.  Those were not academies of rebellion.  They did not preach the values of republicanism and national self-determination.

To understand how he emerged from this background to devote his entire adult life to the cause of Irish independence and republicanism you have to understand more about his background and the context of those times.

Vital for him was his Wexford connection.  His mother Sarah Jordan came from Castletown and it was to Wexford he was sent for 3 years as a child when his father fell ill – and Wexford never stopped influencing him.

He was here when the centenary of the great republican rebellion of 1798 was celebrated by a people announcing to all that they were proud of their history and inspired by its idealism.  It was with immense pride that people remembered what was the largest rebellion anywhere influenced by the French Revolution.

When he finished school Mellows father wanted him to join the military and continue the family tradition.  Liam refused.  Instead he went to work as a junior clerk in Dublin.  Soon afterwards he was attracted by the rising number of nationalist organisations seeking to promote Irish language, culture and self-determination.  As early as 1912 he was sworn into the IRB and later became close to James Connolly.

At only 21 years of age he left his career and began working as a full time Fianna organiser.  For the remaining nine years of his life he dedicated everything to the national cause.

As a Fianna organiser he travelled the country setting up new groups and supporting established ones.  It was from the young people he met then that the majority of leaders during the War of Independence emerged.

From very early on he was monitored by the authorities and was regularly arrested.  In March 1916 he was deported to England but returned before the Rising disguised as priest.  With the confusion and failed general mobilisation, his success in raising a large number of volunteers in Athenry stands out, even if they were not able to fight.

As a wanted man he went into hiding and eventually escaped to New York.  His time in America is not appreciated enough due to a general failure to remember just how important Irish America was in promoting the cause of the Republic.

De Valera’s tour of North America was a triumph.  He addressed over 50,000 people in Fenway Park, packed out Madison Square Garden and was honoured wherever he went.  It showed to the world the face of a new Ireland and of a risen people who were fighting for their freedom.

And at De Valera’s side throughout that tour as one of the main organisers was Liam Mellows – by then elected to the First Dáil as TD for both Galway and Meath.

He returned to Ireland and played an important role in last stage of the War of Independence.  He was not an uncompromising man but he was a deeply committed republican who wanted a government which was controlled by and served the Irish people.  He tried and failed to bridge the gap between the two and when he failed he joined the Four Courts Garrison.

His execution on December 8th 1922 was celebrated by no one.  It was a tragic end to a brilliant and inspiring life.  There is no doubt that his skills and drive could have served his people well if he had lived.  He would have brought his passion for change and his great organisational ability to the cause of building a better Ireland.

If anyone asks why we remember this young man so many years after his death let them look at how he rejected the comfort of an easy career and spent one third of his life travelling through Ireland and America persuading others to join the revival of the Irish nation. He was a true believer and determined to make a difference.

We can also learn from how Liam Mellows thought about the role of republicanism in his country’s future.

To its very core Mellows republicanism was about building a state which served all the people.  Connolly’s influence on him was in no doubt – and so too his influence on others.

In the last months of his life a group of young republicans in Mountjoy sat with him to discuss social objectives.  To them the linkage between republicanism and social progress was absolute.

It was the more practical strain of this republicanism which led to the foundation of Fianna Fáil in 1926 and the development of its radical economic programme.

One of the most often stated and most clearly untrue claims about Irish politics is the idea that we have so-called ‘civil war politics’.  This is superficial and it misses absolutely central elements of how our party system developed.

Fianna Fáil was formed very specifically because De Valera, Lemass, Markievicz and the other great leaders of that time were determined to move on from the civil war.

They formed a party focused on tackling the problems of today and tomorrow, not on replaying the fights of the past.  The sheer scale of Fianna Fáil’s success in the following years shows that the party’s success relied on attracting large numbers of people who were on the other side of the civil war.

There are those who like to bemoan the fact that we did not have the traditional left/right divide seen in most countries.  What they never admit is that we also have never had the extremism which such a divide delivered at some point in most countries – and there is not the slightest evidence that such a divide could have matched let alone exceeded the growth we achieved.

When our country has succeeded it has understood that economic and social progress are not competing goals, they go hand in hand.

There is no doubt that public services have been eroded over the last five years and they have to be rebuilt so that people can access services when they most need them.

When we agreed to facilitate this minority led government we laid out policy priorities and these are all service based so that people can see and feel the difference.  We wanted services developed in mental health, waiting lists education and of course housing.

It is not realistic for Fine Gael to be talking about introducing an American type low tax rate when children with special needs are not getting access to speech or occupational therapists.

Often the biggest enemies of progress are those who offer easy solutions or pretend that all we need to do is tax and spend whatever you want.

This is what we see today from our hard-left parties.  They have nothing positive to say about the private sector.  Demanding billions in extra taxation, targeting companies and calling for the nationalisation of vast swathes of industry, and promising a ridiculous €25 billion in extra funding.

These parties are not offering a social alternative, they are offering cynical politics.

Our economy is faced with very real threats that cannot be taken for granted.  Brexit could permanently cut large numbers of jobs and significantly reduce government revenues.  It is a bigger threat than before because it will be permanent.

But we also have to understand the need to develop our economic model.  We can’t stand still and expect everything to be fine.

We have to protect multinational employment – but we must also diversify our economy. The best way of doing this is to support smaller and medium sized businesses. These are the back bone of employment across Ireland.   They are what is keeping people living in rural Ireland.

Our country has just come through a deep recession.  The core strengths of the economy built up in a decade of targeted investment and the skills and dedication of the Irish people has secured this recovery.  However the core challenge remains of making sure that our country works in the interests of all of its people.

I make no apologies for the priority which we have given to pensions and other supports for older people.  It is a basic part of our social contract that we will recognise the contribution of older people.  We have secured the beginning of the unwinding of some of the worst and most unfair cuts which had been targeted at older people under the last government.  Even the current Minister for Social Protection has stated that the previous five budgets were unfair.

What we need now is to move on from annual arguments over increases to a comprehensive approach.  We need a multi-annual commitment to developing services and improving incomes. We have secured the phased restoration of ex-quota career guidance counsellors to secondary schools, and the restoration of some supports to post graduate students, and we also have a commitment to decrease class sizes. Education has always been a core value of our Party as access to education allows people to progress in life.

The elderly need to be supported to stay at home and they need home care packages. It is not acceptable that numbers of home help hours have been cut and that people with dementia are not getting intensive home care packages despite numerous announcements being made about money being available.

There is an air of detachment about this government as they are spending more time on trying to stay in government rather than prioritising serving the people that elected them.

Through the confidence and supply arrangement we secured a significant rebalancing of budget policy towards helping people most in need.  Essential services have done better and grossly regressive tax changes were dropped. There is no doubt more needs to be done and we will do our utmost to hold this government to account.

In the years ahead people do not need more populist promises that are not achievable. We don’t need parties promising to abolish large taxes or promising to abolish private enterprise.  We need a balanced approach which gives people a break and invests in vital public services.

During this year’s commemorations there has been a wonderful, positive atmosphere.  It has shown a modern republic which is proud of its history and willing to apply a broad and generous approach to the past.  The central role of our founders and their tradition is clear, but we have shown an open approach to respecting other traditions.

You cannot look at the past in terms of black and white – of simplistic unbroken chains and rigorous divisions.  Just look at Liam Mellows – the son and grandson of soldiers in the British army, educated in military schools and brought up to carry on the family tradition.

His was a complex background and a brilliant life.  A life defined by passion, dedication and great achievement. We can all still learn from his commitment and drive to make Ireland a better, more caring country.

He loved his country and served its cause.  He was brave and inspiring.

It is right that we gather here today and honour his life and his memory. 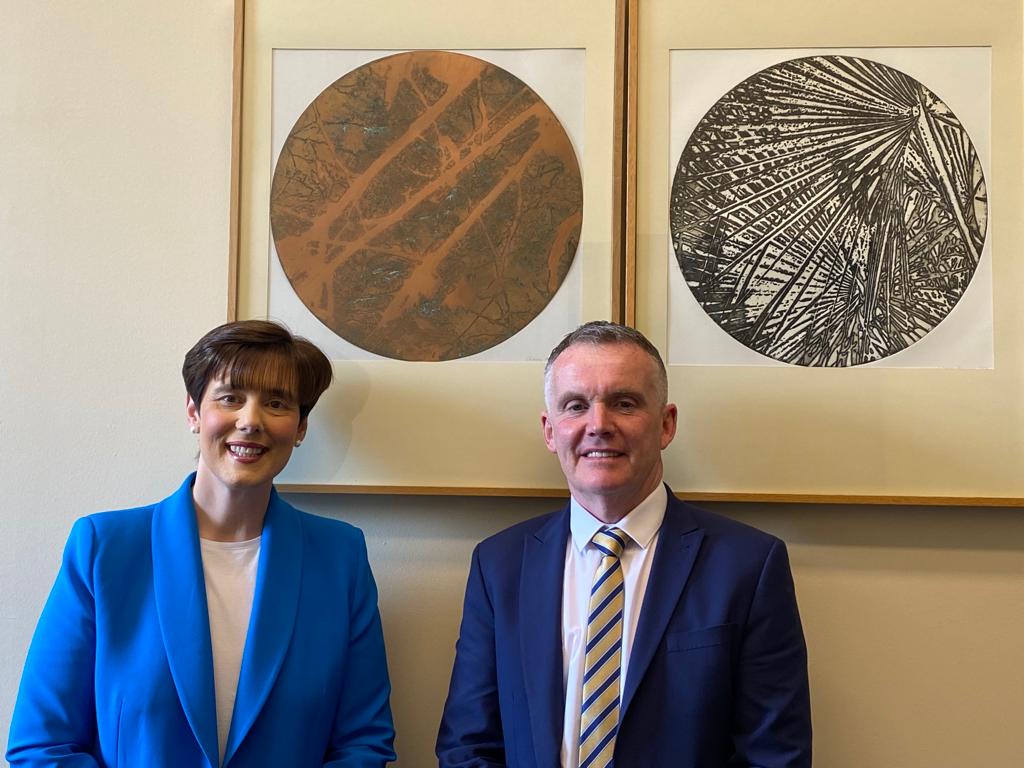